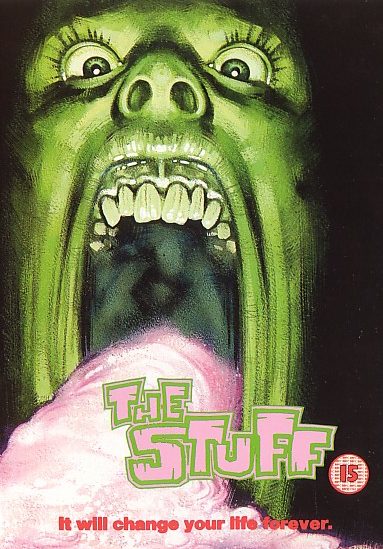 Finally I got my hands on this classic satirical horror film from 1985 and I have to tell you that I quite liked it. First because it is entertaining and ambitious and secondly because of its social criticism. A lot of B-Movies are ridiculed by reviewers because the financial restrictions, the bad acting and the hilarious and most of the time exaggerated plots tend to result in cheesy and trashy outcomes. If you examine The Stuff on a cursory level, this may be true, but it still works.

The premise of the film is built on a white, ice-cream like, gooey substance marketed as having no calories but being sweet and saturating, which soon becomes a nationwide moneymaker. David “Mo” Rutherford is hired by some worried ice-cream industry and fast-food moguls who see their business at risk in order to find out what secret hides behind this anti calorie bomb. While the story evolves, “Mo” teams-up with Jason, a boy who has witnessed how The Stuff has affected his family and Nicole, the advertising executive of the product. Together they, with a few rather weird people, try to relieve America from the addictive dessert.

For a “trash” horror flick from the 80s, the “special effects” are above average and director Larry Cohen even managed to shoot one scene in the popular Nightmare On Elm Street rotating room:

On the one hand, the rather professional look and approach of the film have been achieved inter alia through the estimated 1,7 million dollar budget. On the other hand there is always some kind of unprofessional attitude leaking out which results in a lot of highly visible and typical b-movie “mistakes”, like the really bad editing. At first I was not sure if I borrowed a cut version of the film but after I checked this out I came to the conclusion that the editor simply must have been high all the time because some of his work simply doesn’t make any sense at all.

As mentioned before, The Stuff tackles a rather interesting subject. It caricatures the western (fast) food culture, the blind and excessive consumerism (of unhealthy food) and the importance of marketing strategies in order to sell the crap. The Stuff highlights that we live in a simple minded consumer society in which the customers have become zombies complying with the media-dictated beliefs, values and norms without questioning anything. And above us all there are the big food conglomerates who pull the strings and do whatever they want. To conclude, you can see The Stuff as a nice little horror movie with a lot of charm or you can see it as a critique towards nutrition in modern societies which are heavily marked by pseudo-individuality and TV commercials. Give this one a try!