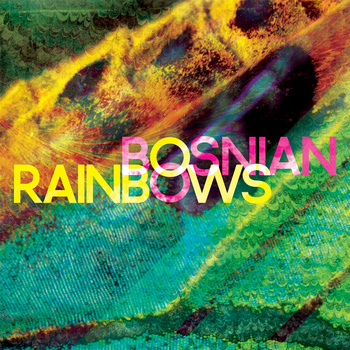 The Mars Volta are dead, time for Omar Rodriguez Lopez to start another of his numerous personal projects. However, Bosnian Rainbows is a band in which he leaves the foreground to others, first of all Teri Gender Bender from Le Butcherettes, escorted by keyboarder Nicci Kasper and the one-arm drummer-while-keyboarding-with-the-other-one, Deantoni Parks. All together, the quartet plays a very hypnotic mixture between pop, synthpop, postpunk and progressive rock, although the “jamy” character of the last one apparently is way more present on stage than on this self titled debut.

The playfulness and creativity in which the front singer is covered during the whole album certainly defines the band’s character. Furthermore, the love for details provides many different spaces to discover synthetic and hypnotic secrets for the lovers of the genre, not to forget beats, sound walls and effective guitars. Still, the songs always have a clear line from the beginning to the end as a base frame, even though one sometimes misses a certain step to craziness. However, this may be due to my personal love considering The Mars Volta’s unpredictability. One obviously shouldn’t compare those two bands.

Rodriguez Lopez, as already stated, pulls the strings in the background, but never loses presence at any moment. In songs like I Cry For You one can even hear a certain will to break out and let the rock guitar beat the synthies, making the song sounding like a relationship crisis between guitar genius and electronic superiority. This may sound negative at first, but in fact this is one of the strongest songs of the LP.

In others however, as already suggested, a certain courage to go further is highly missed in my ears. The songs sometimes lose themselves in synthpop hymns that every one of us has already heard over the years. Nevertheless, Omar Rodriguez Lopez has never operated a really bad project, which is still the case in 2013. For lovers of the genre, Bosnian Rainbows will certainly deliver much joy with this first album and hopefully also with future outputs.