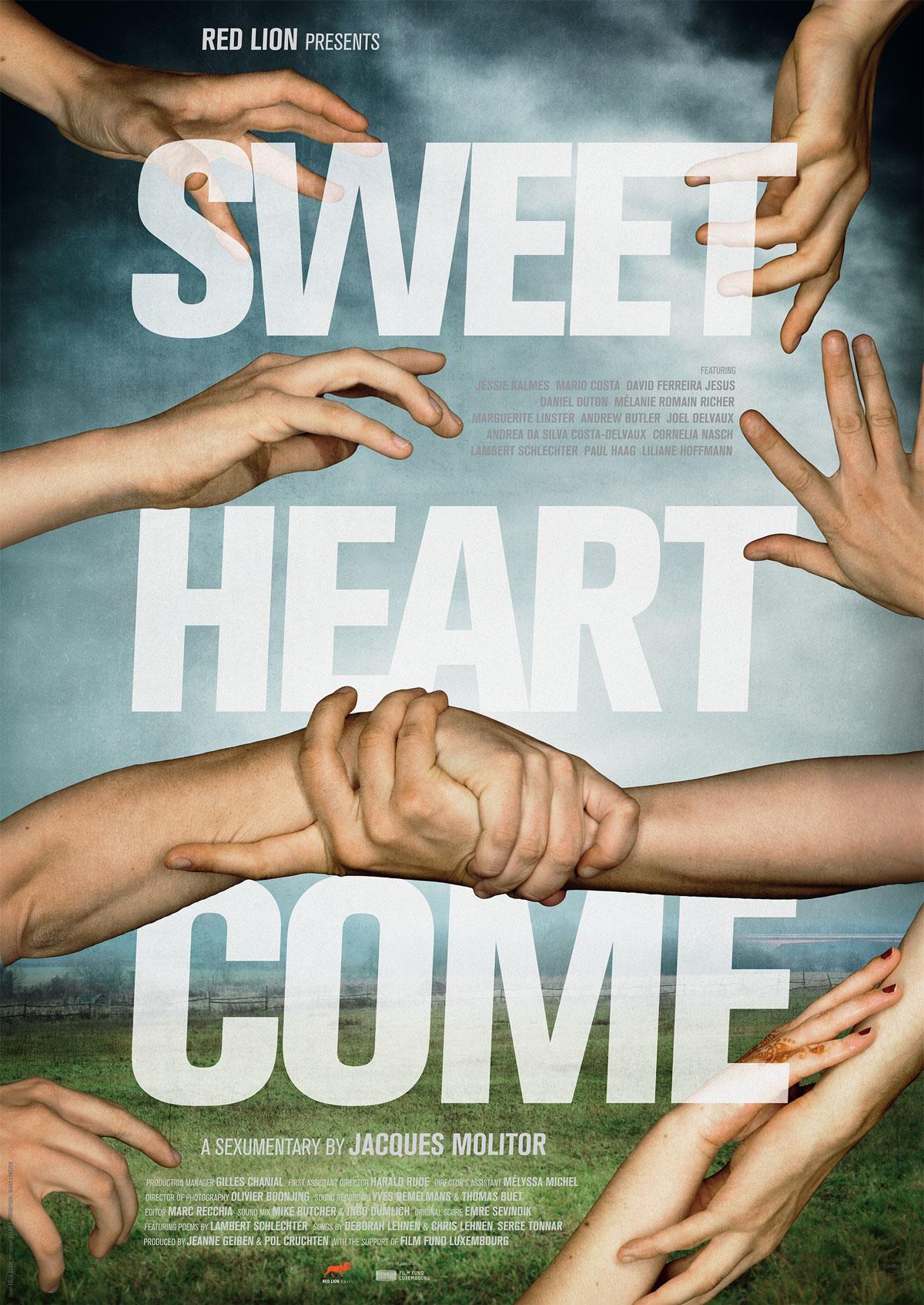 Has it ever occurred to you how little you know about your country and the people in it? Day after day we see edited, squeaky clean versions of our neighbours, never aware of what’s really going on inside of them. In a tiny and wealthy place like Luxembourg, where everyone seems to know everyone and thus fear of judgement and feelings of inadequacy are prevalent, this effect is magnified.

For his self-described “sexumentary”, filmmaker Jacques Molitor wanted to scratch the surface and went on a quest to uncover people’s innermost thoughts and desires. He interviewed Luxembourgish citizens from all walks of life, many of which have suffered serious blows of fate. The result is a sensitive ode to love and sexuality as experienced by a wide range of Luxembourgers. Sweetheart Come is an intimate and honest account, but never shocking or sensationalistic, which is vitally important considering the delicate subject matter. It is true to life, and this inevitably means that it depicts a great deal of sadness: despite its heart-warming and even chuckle-worthy moments, it leaves us with a heavy heart and a head full of questions.

It seems that sex(uality) has finally become the most natural thing in the world, but unfortunately only as long as you are young, heterosexual and conform to the norm overall. Also, for the love of God, let us stay superficial. Don’t go to deep. Let’s not talk about desires, sexual preferences, practices and fetishes and please stay away with sexual orientations other than heterosexuality. Personally, I think that we are pretty damn sexually close-minded in our ever so open-minded societies.

With Sweetheart Come, direcor Jaques Molitor created a “cinematographic radioscopy of sexuality and relationships (in tiny Luxembourg)” and lays the focus on people who not only have to deal with their own private struggles but also face jaundices when it comes to their sexuality and are marginalized because of who and how they are. Molitor portrays, among others, a physically disabled couple who talks about their love for each other and that they, just like any other couple, have the desire to sleep with each other. Due to their handicap they are nearly completely dependent on professional help which begins when they only want to lie on the bed and cuddle. As if this was not hard enough already, most of the time, it is society which has a problem when it comes to sexuality and disabled people. The regular people, just like professionals, often pull the power card. Rather than leading an indispensable dialogue, we tend to close our eyes and deny disabled people’s sexuality, and here I am not even talking about mentally challenged people’s desire to have sex, a family, children etc. I am aware that the dialogue isn’t an easy one and we should not pull at society’s heartstrings in the style of I Am Sam, but there are other countries which are aware of and at least try to support disabled people’s private/sexual wishes and needs. Molitor did a really good job at portraying Joel and Andrea, they were my favourite couple.

Another group of people that is often associated and characterized with asexuality are old people. If you are old but still fit and independent, this prejudice can already be annoying, but at least you can raise your middle finger and say “fuck off”. What about people who are somehow disabled/ill and dependent? It is usually not only the family members but also the professionals who say things like “people your age should not think about sex anymore, let alone be sexually active.” And the power card is played again. We close our eyes and what we don’t see doesn’t exist. Again, I am very happy that Molitor did not forget about the elderly who are unfortunately forgotten too often nowadays.

The two segments of the documentary mentioned above are my favourites, as I had not necessarily envisaged them. But please, do me a favour and watch the whole documentary because each one of the interviewees has his/her very own story to tell.

The majority of foreigners I meet know very little about the Grand Duchy, if they are aware of its existence at all, and it hardly comes as a shock — our country is rightfully considered the microcosm of Europe. And when people from other countries ask you about your own, they want to know what it is made of. They want to know what lies at its heart and what makes the people tick. They don’t want to hear you rattle down the historic events and political workings that lead up to its current state or a list of the monuments and architecture it has to offer, they can google that later at home.

So which adjectives would I use to describe the Luxembourgish temperament? Truthfully, I think of us, the average folk, as rather aloof, judgemental and materialistic, and it’s not just me. There are parodies of this. Our channel RTL aired a sitcom thematising the bourgeois “what will the neighbours think” type of mindset last year (it was torn apart by the viewers), our conservatism is a favoured theme in the lyrics of some of our most popular local artists, and anonymous commenters are happy to either serve as a prime example of or point out our shallow values under news articles at any given chance. Joel Delvaux, certainly one of the most inspiring and cerebral interviewees in Sweetheart Come, described the phenomenon with one poignant example: “[Disabled people] have the option of a ‘sexual assistant’ in some countries, but there’s no such thing here in Luxembourg. It’s as though human contact, physical contact were considered a luxury.”

I’m grateful that this documentary was made because it’s not afraid to delve into the taboo realms of our society, the realms which remain largely unexplored by the average privileged middle class Luxembourger. It gives a voice to the people we tend to ostracise and helps us realise that in spite of our vastly different backgrounds, under the cloak of conservatism and restraint, we all want the same thing: to be loved and fulfilled as people. And our suffering is universal, too. My favourite quote stems from an incredibly soulful professional dominatrix by the name of Connie: “If you learn to trust someone in a normal relationship and it goes wrong, it tears the soul apart.”

Sweetheart Come gets right to the heart of what really matters in this life, and does so with a gloomy aesthetic that suits the tragic beauty of it all. Next time a foreigner asks me to tell them about my country and my people, I will point them to this film, as it comes closest to painting the most accurate portrait.

Watch the trailer for Sweetheart Come below. For more information, you can visit the documentary’s Facebook page.