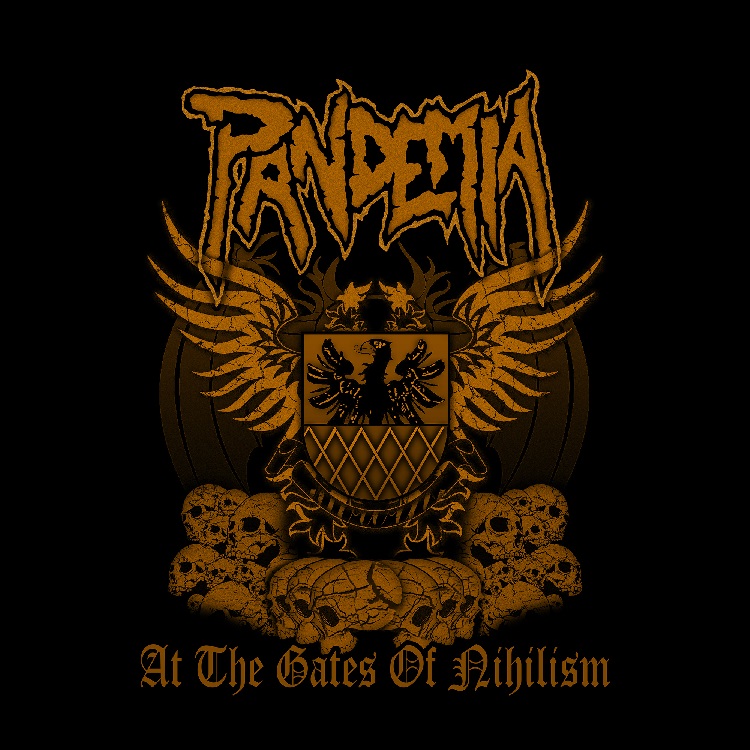 When I put on today’s record, I felt like it had been a decade since I listened to a death metal album, then I realized that it’s already 2015 and my feeling is actually confirmed: it’s been a long time. My roots were in thrash and death metal before I started venturing into other genres and eventually discovering the genres I enjoy the most these days. However, Pandemia managed to make me miss those olden days with their new album At The Gates Of Nihilism!

Interestingly enough, the Czechs are celebrating their twentieth band anniversary this year, so it kind of feels like full circle…but I digress. This long-time experience means that they have got this traditional genre down to a t: the guitars sound so menacing that at times you might start to worry about your health, the drums are an inferno of blast beats and double bass attacks, and the vocals tear everything to shreds that is in their way.

The quartet doesn’t stop there though, instead they blend the brutality with bite-sized pieces of groove and melody, which adds a ton of depth to the eleven, twelve if you count the Loudblast cover bonus track, songs. Combined with the crazy solos that are thrown in the mix and, most of all, the truly catchy songwriting, this creates a sound spectrum that managed to grip me from the get-go.

During the forty-one minutes, the vocalist delivers a stunning performance that is mostly kept in the growl range, but also features, what I like to call, “insanity screams”. You know, those screams that would make you feel concerned about a person’s mental well-being if you heard them outside of a musical environment. Good stuff!

All in all, Pandemia made a genre that I had mostly written off, in terms of personal taste, really relevant to me again. While I definitely won’t go out and buy twenty death metal records at once, I feel like it won’t hurt to give some albums in the genre a chance in the near future. So, do yourself a favor and give At The Gates Of Nihilism a spin when it’s released, on February 23rd! Until then, visit the band’s Facebook page and listen to the song below!
[youtube https://www.youtube.com/watch?v=crJB5yQTUNQ]