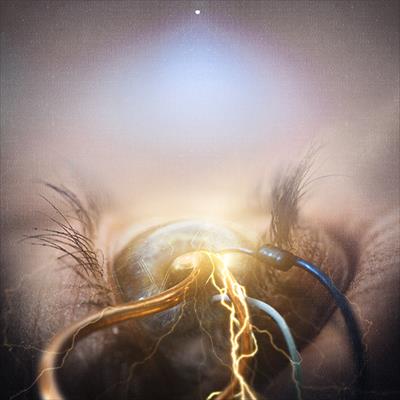 The remaining band members of The Agonist seem a bit lost without Alissa White-Gluz. At least that’s what I thought when I heard their new album The Eye Of Providence for the first time. I have to admit, that there are some interesting riffs on the new album, the pounding drums are fine as well and the new singer Vicky Psarakis definitely knows how to cast her magic spell on you with her brilliant voice. But somehow it’s not only the vocals that have changed… It seems as if the whole line up is different on this record.

Let me explain what I mean: As mentioned in the beginning, there are indeed some really cool riffs on The Eye Of Providence (e.g. Gates Of Horn And Ivory, Faceless Messenger, Perpetual Notion, Follow The Crossed Line). However, I do feel quite a lack of innovation throughout the whole album. The riffs are often quite boring, repetitive and even pop-like. And many times, the guitars only sound like some sort of background noise, especially during Vicky’s choruses. Maybe they did that on purpose in order to be able to show off her awesome voice…

Apart from the riffs themselves, the structure of the songs is quite different on the new The Agonist album. Compared to the previous albums, the song structures have been simplified as well. The Agonist have become a bit less progressive and are now sticking a bit more to the typical verse-bridge-chorus structure. Since this is a matter of taste, I’m not going to comment on whether that is a positive or a negative change.

Another thing that has changed is the sound of the band as a whole. Not only has the percentage of the clean vocals been upped a lot, also the guitars sound a bit more polished. I haven’t checked out the old stuff especially for the purpose of this review, but I think I remember the guitar sound to be a bit more aggressive and tuned down a bit more.

I tip my hat to Vicky though. She truly has an amazing voice and can easily poison your heart with her soulful clean vocals. She also does know how to scream and growl but Vicky’s unclean vocals can’t compare to Alissa’s, which might just be the reason why there’s more clean vocals on this new The Agonist album. This will probably also disappoint one or the other fan.

All in all I can’t say that The Eye Of Providence is a bad album! It can actually get you going at some points. However, the points that I mentioned in the article will probably disappoint old school fans. But maybe they changed with the goal to attract a new audience… It’s clear that this album is definitely more suitable for the masses.
[youtube https://www.youtube.com/watch?v=urcLhku0I7Y]

This review was written by our Freelancer David from The Metal Diplomat!