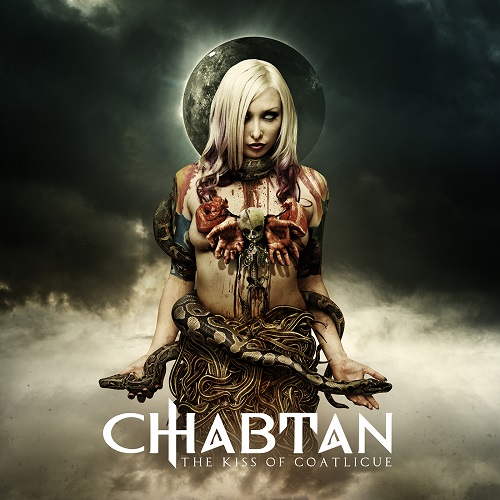 I honestly can’t put into words what it is, but there is something about French metal that I can distinguish nine out of ten times upon my first listen. One thing that does come to mind is that they absolutely love the almighty groove and modern elements, the same goes for Chabtan, who are going to release their new album, The Kiss Of Coatlicue, on May 25th!

More specifically, the quintet roams into the deathcore genre while adding some symphonic elements and, as mentioned before, a thick layer of groove. A mix that works quite well in my opinion, but on the other hand the songwriting is for the majority of the eleven songs very similar and there are admittedly very few surprises.

The production is very modern but it delivers in the right places, with every double bass kick as well as every blast beat sounding nice and crisp. However, the guitars, while generally-speaking well recorded as well, do lack a bit of punch and have a tendency of turning into mush during the quicker passages, but that’s forgivable because the main sound hammers well enough throughout the forty-seven minutes.

The entire record is a concept album about the Mayan gods, notably the death gods, and despite having a bit of a hard time understanding the lyrics, due to the notorious Frenchie accent on one hand and the screams, screeches and growls on the other hand, they seem to be fairly interesting. The different singing styles offer enough variation to avoid repetition and there are a couple of dual-layered passages that sent shivers down my spine…chapeau!

All in all, Chabtan deliver a solid debut record that will definitely win over genre-enthusiasts but, for me personally, there was that special little something that was missing to make the spark jump over. As always, I do advise you to make up your own mind and check out the song below, before heading to their Facebook page to keep up with them!
[youtube https://www.youtube.com/watch?v=Oxa0I8NI3ro]