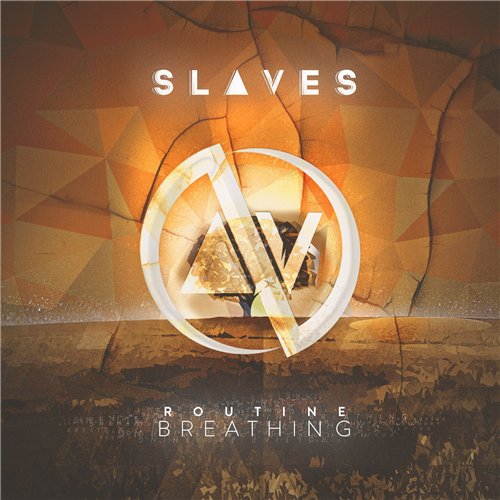 Wow! Talk about being productive! It’s been a little over a year since Slaves have released their debut, but they already have a follow-up which came out on August 21st, titled Routine Breathing. Productivity doesn’t always equal quality though, so let’s see what the guys have come up with!

First off, I find that the songwriting has greatly improved, with each track being memorable than the last one, even though I found this album to be more of a grower than a shower, so to speak. While a few catchy parts stood out to me on my first listen, it wasn’t until my fifth or so round that I was able to actively differentiate between the various songs…but the investment was well worth the while. Because the substance of the fifteen songs is quite enormous.

Whereas the instruments on Through Art We Are Equals were more of a backdrop to Jonny’s singing, they all play their own role this time around but still don’t overshadow the, arguably, core of the band. Several riffs really impressed me when I first heard them, and now I always look forward to the part they kick in. The same goes for the drumming, which is still played rather purposefully, instead of showing off…but it simply delivers more strongly than on the predecessor.

As I mentioned above, the main reason, I think, we all listen to Slaves in the first place is found behind the mic…and fuck me running if it isn’t an amazing reason for us fans to enjoy album number two. The performance Jonny puts forth on these fifty-one minutes is beyond astounding and, even though I said that last time already, is the strongest in his career thus far. The sheer emotion and power that can be felt in every note is what firmly cements his place at the top of all the singers out there, in my book.

However, same as last time around, the band must have felt that even a strong voice can need some back-up, which is why they got several guest singers to perform on four tracks: Garret Rapp of The Color Morale, Spencer Chamberlain of Underoath, Kyle Lucas and Tilian Pearson of Dance Gavin Dance. Especially the latter delivers such a heartwarming performance on the song Winter Everywhere that I seriously hope that in due time there will be another co-lab of these two former and current DGD singers.

All in all, Routine Breathing is anything but what its name suggests…because I’ve been heavy breathing the entire time. The Californians outdid themselves on the whole line, and have without even a second of doubt delivered an album that is a worthy contender in my top five. But don’t just take my word for it! Check out the song below, and if you like what you hear, head over to the band’s Facebook page to get information about where you can buy the record!
[youtube https://www.youtube.com/watch?v=p-H-uUweM0M]