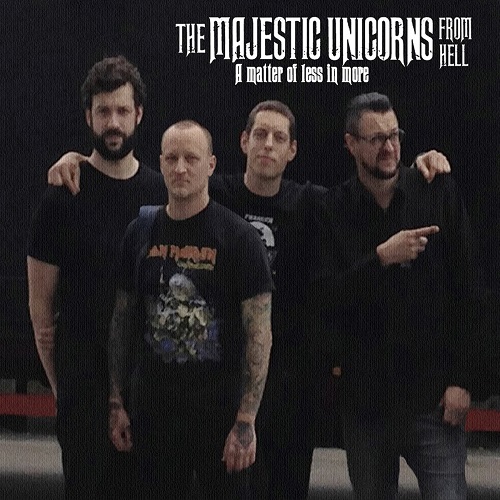 “How can less be more? It’s impossible. More is more.” Never has this sentence been more accurate and more false at the same time than in the intro of the new record by a band that is definitely in the top 4 of all the instrumental bands that we have here in Luxembourg. I’m a terrible liar: it’s actually on the new record, A Matter Of Less In More, of, hands down, my favorite one of the genre: The Majestic Unicorns From Hell. The band that is guaranteed to cure any illnesses you have in exchange for a hefty dose of tinnitus and whiplash. So let’s dive in before the actual release date of February 12th!

When I reviewed their debut, Valde Purgamentum, in 2013 my first reaction was “holy fuck!”. Well…not much has changed in that regard this time around, except that the sentence was slightly more articulate, in the form of: “holy fucking shit, they did it again, those bastards”. Mainly because, as stated in the intro, the quartet followed the recipe of more is more: instead of just cranking those dials to eleven, they yanked them to forty-two, sixty-nine and finally six hundred and sixty-six.

The intensity is constantly present and each musician explores the limits of the sonic spectrum in their own regard, be it in speed, technicality, atmosphere or groove. And let me tell you something about these ten songs: the groove is strong in this one! But, here’s where the Teenage Mutant Music Turtles also contradict themselves! Less is sometimes more, because the number of songs and the playtime of thirty minutes is definitely less than on the predecessor…but it works, it works so damn well!

Level with me here: I think my playcount of AMOLIM (so catchy!) is probably close to fifty times, and I still feel like I’m listening to the soundtrack of a movie! I can’t really tell you which type, because it ranges from psycho thriller, to horror flick, to seventies porno, but the atmosphere is always palpable. A very good example of this cinematic feel is on the song Green Thursday Mr Beast, during the last two and a half minutes when this riff sets in that just screams despair and I picture a 28 Days Later-like scenario where humans are being chased by zombies, before erupting into an almost catatonic melody interlaced with a sampled speech, giving me a feeling of hope. Pure joy.

To sum things up, I can without a doubt claim that the magical equestrian beasts from the very deep south have not only outdone themselves this time around, but also hands down found their sound and I’m confident that, with a bit of luck, their future will be a bright one…and if not…remember: less is more! If I managed to spark your curiosity, be sure to head to their Facebook page and don’t forget to listen to the new TMUFH album below! But beware: you touch, you buy! Thank you, come again! Oh, and if you like what you just bought, be sure to move your sweet cheeks to De Gudde Wëllen this Friday, where the fellas will play a concert that somehow coincides with the release of new music…but it’s not a release show, I swear.