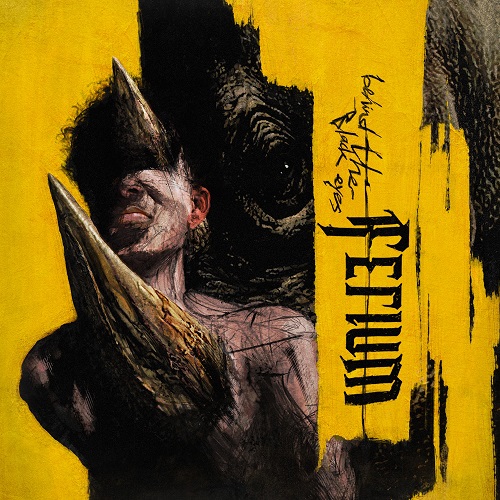 Ferium: the name alone has the word metal in it, subliminally at least, so it comes as no surprise that the quintet lays down some truly heavy tunes! But let’s rewind a couple of years here, to when I first discovered them and was surprised by their debut Reflections, an experience you can read up on…right here…I’ll wait. …ok, welcome back. Back to the present: the guys are back with their second full-length Behind The Black Eyes and I’m looking forward to sharing my thoughts on it with you guys!

Essentially, the Israelis have not changed their style a lot and remain true to their groove-infused modern death metal…but it’s hard to deny that they’ve fine-tuned it a lot and everything simply sounds even more massive! Each and every riff has the potential to knock your teeth out and the drums feel like incessant cannon-fire on your eardrums.

While I don’t feel like any individual member has vastly improved in comparison to the predecessor, simply because there was little to no room left to do so, the end result is of higher quality. What I especially appreciate about it, is the fact that the band stuck to recording, producing and releasing in-house, because it gives them complete artistic freedom with zero compromises, while at the same time having enough faith in their fans to support them.

When I first listened to BTBE, I was scared that the album would be too straight-forward and lack in diversity, because that’s often a danger that bands in this genre face, but I was pleasantly surprised to find two songs among the nine tracks that do things (a lot) differently. I would consider them atmos(h)pheric almost-ballads, that just serve the purpose of building up the final two songs of the record in all their grandeur…and it works, really well.

I’ve mentioned in previous reviews that the length of an album can sometimes have an impact on my liking of it, and I find that with Ferium‘s new release, the thirty-five minutes hit the exact spot for me, since it’s just long enough to leave me wanting more but not so short that I would feel cheated out of my money, had I not received a digital review copy.

All in all, I’m impressed by the evolution the band has undergone, and I really hope that even more people will recognize them for what they are: a very promising newcomer! So, do yourself a favor and check out Behind The Black Eyes when it’s out on April 21st! And in the meantime, head over to their Facebook page and check out the video below to whet your whistle!
[youtube https://www.youtube.com/watch?v=dQfY3Dy_Vtc]