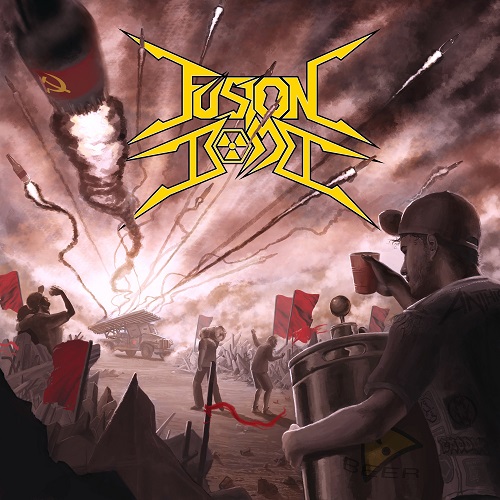 Little history lesson: about three years ago, there was a surge of new young bands emerging in the local scene and playing a lot of small shows. The vast majority of those bands were of the same genre: something-core; be it hardcore, metalcore or deathcore. A fact that I have nothing against, since I enjoy most of those genres, but there was one gang of youngsters that stood out to me. Simply because they decided to go against the grain and play an “unpopular” genre, because it was what they loved: crossover thrash metal!

If by now you haven’t figured it out, the quartet that I’m talking about is of course Fusion Bomb, who finally have actual recorded music to show in the form of their debut album called Pravda! Depending on your general knowledge, the name might give you an idea of what this concept album might be about, but just in case: it’s about the history of the Soviet Union and its eventual downfall. Well, except the last song, Beertroopers Of Death, which on one hand is a homage to genre pioneers S.O.D. and on the other an instant-classic drinking hymn!

In the guitar department, the six tracks, including an intro, are generally-speaking very fast-paced and straight-forward, with one gallop riff fading into the next, but manage to infuse just the right amount of groove and technicality in the form of intricate solos to keep you interested as a listener. Throw in fairly organic sounding drums that know exactly how to go along with that vibe by bombarding your eardrums with blast beats and double bass attacks, and you’ve got yourself quite an enjoyable package. I do have to mention that the songwriting isn’t exactly diverse and many passages are repeated ad infinitum during the individual songs, but to be fair: that is a staple in the genre.

However, I do have one partial gripe with these twenty-eight minutes: the vocals. While they sound very powerful and well-performed, it is almost impossible to make out any of the lyrics because the enunciation is at times really horrendous. I wouldn’t have a real issue with it, if it wasn’t a historical concept album, where the lyrics are potentially a major factor of enjoyment.

To sum things up, what can I say? Is Pravda a breath of fresh air in the fairly repetitive Luxembourgish scene? You betcha! Is it flawless? Definitely not. Is it worth your time though? I would say so, yes. Fusion Bomb have a lot of potential and talent, and this respectable endeavor is perhaps the first step toward greatness! Be sure to listen to watch the lyric video below and head over to the band’s Facebook page for more info on the release of the album next Saturday, September 24th, at Angerfest in Kulturfabrik!
[youtube https://www.youtube.com/watch?v=MBm5eg_RMME]