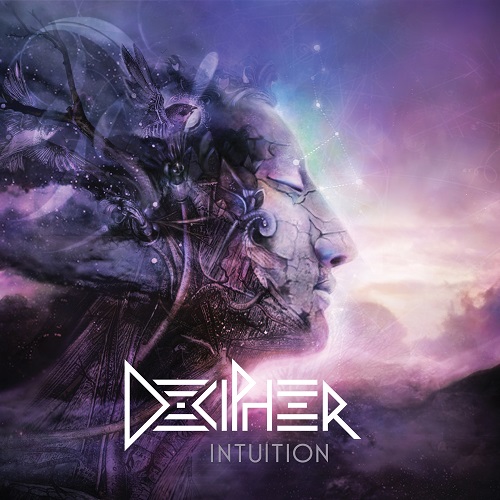 Despite no longer writing as often as I used to, I always try to stay up-to-date when it comes to the local music scene, but I have to admit that the mere existence of today’s band completely eluded me until they contacted me to do some minor videowork for them. Fast forward several months and the release of Decipher‘s debut album, Intuition, is only a couple of days away, which is why I figured I’d end the year with one last pre-release review!

The young quintet has chosen technical death metal to be their playing field and have taken the time since their inception to refine their sound by adding various elements and fine-tuning it to create an interesting take on the genre. While the addition of djenty riffs and atmospheric parts is not an entirely new approach, I feel like the guys are pulling it off without sounding like a re-hash of every other band you’ve heard before.

This is, in my opinion, largely due to the simply remarkable level of musicianship that each member brings to the table. The harmonic interplay between the spot-on drumming and the tight bass lines makes for a solid foundation on which the two guitars battle in tandem of who can play the most intricate riff or the craziest solo. While there is also a healthy dose of chugging, it never feels overly mind-numbing and merely gives you a short breathing pause.

The vocals are the one aspect where I’m not one hundred convinced yet, but still see a ton of potential: the singer has a respectable range and technique, but I feel like for a majority of the parts in the different songs, he chose the wrong one at the wrong time. His main modus operandi are deep growls, that could almost be used in a grindcore band, which made it very hard to understand the lyrics for the most part of these thirty-six minutes. However, in other parts he uses screams or screeches that are fairly well articulated and might have been the wiser choice.

On the other hand, the vocal department also holds the biggest surprise of these seven tracks, in the form of a guest vocal appearance by the local singer Anna Felke on the song Soulbound. While the song is fairly untypical while compared to the rest of the record, it fits in perfectly into the concept of the entirety and, aside from the closing track L’or Bleu, is definitely marks the highlight of Intuition.

In closing, I can only say that I’m convinced that Decipher will manage to make a splash in the local music scene once they start playing shows and get their name out there a bit more. One thing is certain: they don’t lack talent. So do yourself a favor, listen to the track below, check out the band’s Facebook page and head on over to Rocas this Friday, December 16th, for a cozy listening party marking the release of the band’s firstborn.
[youtube https://www.youtube.com/watch?v=mIMRuuS79UI]