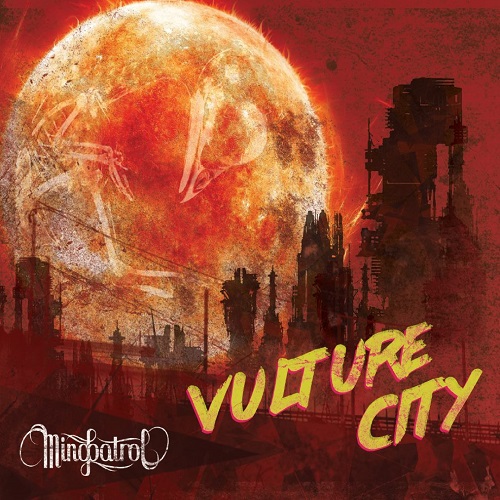 I figured I’d end the year the way I started it: with a review of a local band. There is, to my knowledge, no band in Luxembourg that is as productive as Mindpatrol, since they are about to release their third full length in more or less five years. They stick to their concept album approach and this time around they are taking us to Vulture City, a drug infested dystopian setting! Are you ready to take the trip with me?

I realize that I’m sounding like a broken record here, since I said the exact same thing last time around, but the sextet continues to evolve in remarkable ways. Their sound has become a little more concise, settling comfortably in, what I would consider, progressive death metal and the band seems to know exactly what works, and what doesn’t. The result is a fifty-one minute journey that is jam-packed with memorable riffs and impressive drum patterns. Fun fact: this is the first time that the drums were actually recorded and not created on the computer…and can definitely be heard and felt!

The other factor where Mindpatrol really stand out, to me, is their songwriting, which I would rank among the best in the country. It is one of my main critiques I have with local bands especially, since most of them are fairly solid musicians, but the songs rarely have that extra little something that makes them stand out. While not every single one of these ten songs has “hit potential”, the vast majority is truly well-written and has a nice flow to it. Solos complement the riffs superbly, a good example being toward the end of He, Summoned By The Needle, and small, almost hidden, details like subtle licks every now and then really add a ton of depth. The ensemble is rounded off by a truly massive production quality, that makes every note shine even more!

On the predecessor, one major selling point was the fact that the weakest part of the debut album, the clean vocals, was completely scrapped and replaced by shouted vocals. Ironically enough, I am happy to say that the cleans have found their way back into the fold. Having taken the negative comments to heart, the vocalist decided to completely start from scratch and improve his technique to bring a fresh wind to the mix…and it worked! While he won’t be singing acapella at weddings quite yet, it is a real joy to hear the vast improvement and makes me excited for what is yet to come. I won’t spoil any of the story, but I would consider it the most original and risqué one to date.

What can I say? Vulture City is a major step forward for Mindpatrol and I am convinced that it will appeal to a fairly wide audience, if given the right exposure. To get an idea of what I mean, just check out the brilliantly filmed and edited music video to Her Dire Sacrifice below, and I dare you to not hum that intro along after you’re done listening to the song. The band is putting on a really cool release show this Saturday, December 9th, at Kulturfabrik in Esch, so make sure to swing your behind over there and in the meantime visit their Facebook page for more info.

At this point I’d like to thank you for another year of El Gore and you’ll read me again in a few weeks with my annual Top Ten!
[youtube https://www.youtube.com/watch?v=Gsf-o1ok0ds]