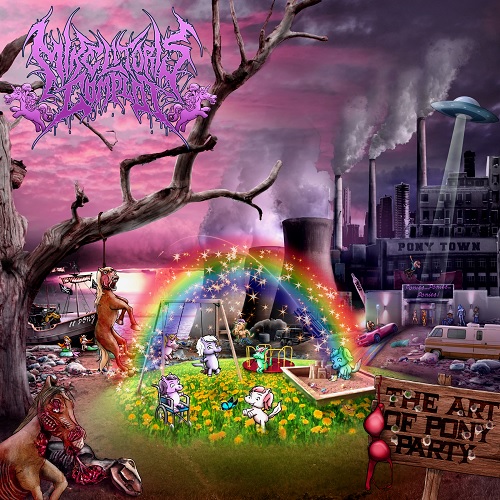 Goregrind. What can I say? It’s one of those genres that never strongly appealed to me, but also one that didn’t put me off completely. A song here and there was actually quite welcome since I liked the straight-forward attitude, however I couldn’t subject myself to much more than that at a time. This has all changed now, since I “had to” listen to Mike Litoris Complot’s debut album The Art Of Pony Party at least once in its entirety in order to review it. Funny thing is: once turned into twice, into thrice, and from there on I stopped counting. Let me tell you why!

First off, I should say that MLC is not strictly goregrind, but instead takes elements of it, fuses them with slam and adds a major dose of humor. Resulting in this weird, but highly entertaining, aural potpourri, where childlike vocals transition into pig squeals and evolve into frog noises. This combination is not necessarily a first, as far as I know, since there is an entire underground scene and even a relatively large festival that revolves around those ingredients in one way or another. But what really makes the sextet stand out to me is the fact that their songs actually have a lot of substance, which honestly surprised me. I wouldn’t exactly call them symphonic masterpieces but the amount of diversity and standout elements is truly captivating.

There are tons of influences, or maybe parodies, throughout the twelve songs that can be discovered with every subsequent listen-through. A thrash gallop riff will be followed by a pure open-string slam attack and end in an almost pop-sounding chord, allowing almost no room to catch your breath, or gather your thoughts. The drumming is fairly straight-forward, with lots of blasting and tons of double-bass barrages, yet never monotonous. The entire ensemble is wrapped in a tight but natural production and knows exactly how to deliver the goods to the listener: right in the face.

All in all, The Art Of Pony Party is definitely a surprisingly well-rounded debut album with very little to no complaints, and I’m sure that Mike Litoris Complot will make waves in the goregrind scene, and perhaps beyond, if they get the necessary and well-deserved coverage. You can listen to the song Circus SlammyGranny below and head over to the band’s Facebook page for more info. And last but not least, consider moving your bum to the Schungfabrik this Saturday, March 17th, where the guys will release this banger!