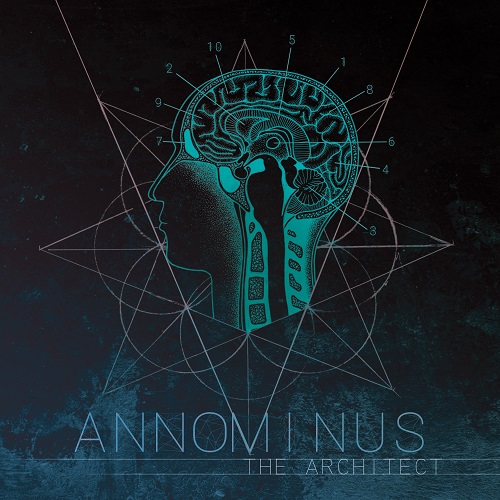 Today I have the pleasure of revisiting a band about which I said that I’d keep my eyes on, when I reviewed its debut record about four years ago. Annominus‘ first endeavor End Of Atonement was a massive throwback to the early 2000s nu metal bands and I had tons of fun listening to it back then. The Danes’ new record The Architect is about to come out, this Friday, and I figured I’d owe them, and myself, a thorough listen.

I’ll get right to it: as I type this review I’m in a state between awe and disappointment, and the more I listen to the record, the more both feelings become stronger. I think tackling the positive aspects first is probably the way to go, so let me say that I am truly impressed by how well the quartet’s sound has evolved, while still maintaining that alternative metal note that made them dear to my heart in the first place.

Some of the eight songs feature many parts that are almost akin to doom metal, with very driving but somber guitars and very melodic singing, that are interspersed through the more straight-forward passages. Generally speaking the guitar work has some really catchy and stand-out riffs that I whistled along to even on my first listen-through. The drums on the other hand are also fulfilling their duty very well and feature some quite interesting drum patterns.

Last but not least, the vocals are, in my opinion, the absolute highlight during these forty-three minutes. The vocal melodies are not only superbly well written and sung, they also contain truly captivating lyrics that deal with the concept of the (self-)alienation of us humans in front of the rest of the world. The occasional screams also fit in very nicely into the narrative and the songwriting in general, rounding off the entire record very well.

Now, you might wonder why I was disappointed and while it pains me to mention it, given the extreme potential of The Architect, I feel like I have to at least dedicate a paragraph to it. I am a huge fan of DIY, this website being completely self-run and -financed, and I welcome it very much in bands. However, I feel like Annominus might have wasted a chance here by opting to go that route. Especially on headphones the mix is really lacking a lot of punch and the different instruments just turn into a homogeneous wall of sound, making the distinction extremely difficult. It might not be a big deal for some, but I’m truly a sucker for good production, and especially in the nu/alternative metal genre it is almost a staple. Full disclosure: while writing these lines, I am listening to the last song on the album on my speakers, which I’ve cranked up louder than usual, and it does sound more passable…so maybe try that for yourself.

With that being said, there is no denying that The Architect is a really solid album in its core and I can wholeheartedly recommend giving it a listen if you’re looking for a fairly interesting mix of influences and a passionate approach to music. Make sure to check the video below to get an idea what I’m talking about and don’t hesitate to visit Annominus‘ Facebook page!
[youtube https://www.youtube.com/watch?v=hy0m8u4Hbxc]