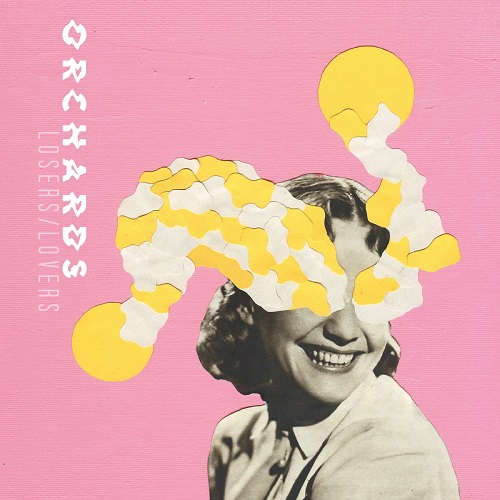 Public service announcement: simplicity is underrated and I have a feeling that many musicians these days try to write complex music, for complexity’s sake. While I am a sucker for technically demanding and outside-of-the-box music, I also love putting on a record and being familiar with it after my first listen; or at least feeling that way. Orchard’s have managed to achieve just that, because their debut EP Losers/Lovers is a pure joy to listen to on repeat.

If I had to describe their sound in two words I’d call it authentic pop: the quartet’s songs could be straight off a pop radio station, because of their catchiness and recognizability, but the fact that everything is actually played by hand, instead of coming out of a machine, gives them a lot more credibility.

While I did call the Brightonians’ music simple, by no means was I implying that it was primitive, because the instrumentation and arrangement of the eight songs are all top notch. A clearly audible and groovy bassline is omnipresent and accompanies the driving drum tracks, while the effect-heavy guitar plays dreamy riffs that all pack a punch and will be stuck in your head after the first go. Yet, no song is ever overcrowded and you can clearly discern everything that is going on, allowing you to absorb them in their entirety.

Orchards do have another secret weapon though: harmonies and canon singing! The singer does a fantastic of reeling you in with her lyrics and her performance can be truly felt throughout the twenty-eight minutes. The cherry on top is the additional vocals, in select passages, by the guitarist that are either sung in perfect unison or slightly delayed depending on the various songs. This small detail lends the ensemble a whole new layer of depth and, having seen the band recently, I can tell you that they deliver that incredible power in a live setting as well!

For now, Orchards are a fairly small band still, but I can without a doubt say that they will be gaining momentum with this release and I hope that they will go far. So make sure to jump on the train of good music early and check out Losers/Lovers when it’s release this Friday, July 6th! You can get a first impressions in the video below and by checking the band’s Facebook page!
[youtube https://www.youtube.com/watch?v=YpF-XDXRwDw]