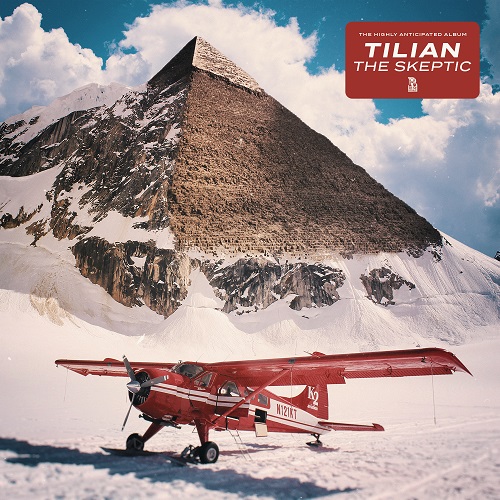 Good pop music is very hard to come by, in my humble opinion, and every time I do stumble upon an artist, or even just a record, that peeks my interest I savor my new discovery as much as possible. Because, like it or not, pop music is very accessible music and every now and then that is just what you need. Today’s review isn’t about a new discovery, per se, since I’ve been aware of Tilian‘s solo career for quite a while, but The Skeptic marks his third record under his own name and it might just be my favorite. Continue reading if you want to find out why I think so!

What sets Tilian‘s music apart from the typical run-off-the-mill pop that you hear on the radio, is the fact that it’s not only written and performed by him, except the drums, but it also holds intelligent and meaningful lyrics. However, that doesn’t mean that they are necessarily overcomplicated and without a hook; on the contrary: on each and every one of these ten songs, I sang, or at least hummed, along to the chorus the second time it came around.

Instrumentally speaking, I would say that it moves in a similar hemisphere as its predecessors, meaning that it ranges from synth pop, over “soft post-hardcore”, to something close to dubstep. The latter is featured on the song Drunken Conversations, and it’s honestly the only song on The Skeptic about which I don’t know how to feel: while the lyrics have a lot of gravitas, I simply can’t warm up to the beat or the electronic-sounding vocals in certain parts.

Going back to the lyrics, and also the overall feel of these thirty-seven minutes, there is definitely another thing I dig about Tilian‘s style: each song has a happy-sad note to it, be it in the form of actually sad lyrics over a happy melody, or serious topics sung about in a self-ironic tone that almost makes them seem light-hearted. While this is his trademark writing style, it is elevated to a new level by his, in my opinion, strongest performance on his solo material to date. Right Side would be my go-to track if I had to pinpoint a highlight of his vocal prowess.

To sum things up, I can definitely recommend giving The Skeptic a thorough listen on September 28th, even if you’re not necessarily into pop music, because I have no doubt that Tilian will continue to impress non-believers. You can get an idea by checking out his Facebook page and especially by watching the video below…while trying not to go on a feels trip.
[youtube https://www.youtube.com/watch?v=N1e6C6mYVR4]