This movie, produced in the US in 1975, is a mixture and combines elements of the (Nazi) exploitation and sexploitation film genre.

The story deals with Ilsa (Dyanne Thorne) who is the commandant of the prisoner-of-war camp: Medical Camp 9. Being a doctor with homoerotic and sadistic affinities, she is interested in “scientific” medical experiments to prove that women are more indolent and therefore better soldiers than men. 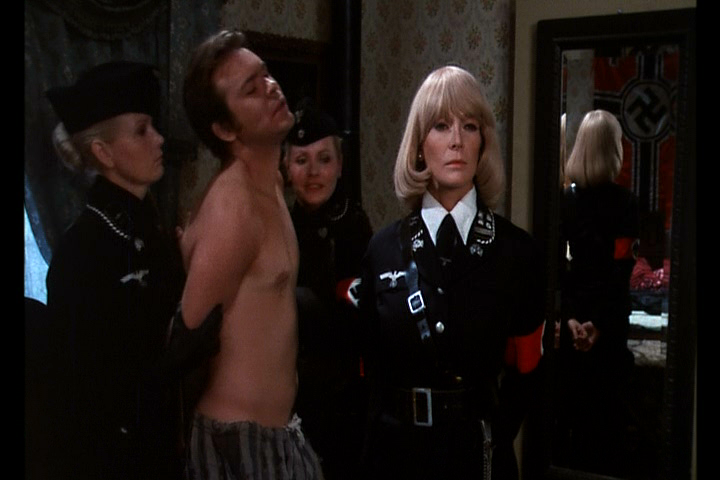 Ilsa is represented as a raping nymphomaniac, who immediately has her victims (male prisoners of the camp) castrated and killed when those ejaculate before she orgasms. Only one prisoner, who is able to hold back his ejaculations manages to turn Ilsa into a more and more obedient, emotional and sexual dependent woman.

One problem with this movie is that the extreme hypersexual and sadistic fictional violence and torture doesn’t even get close to the real atrocities that happened in the camps during World War II. I got the feeling that the only purpose of using this historical topic was to provoke and to promote.
[youtube https://www.youtube.com/watch?v=9YS10vQ_ax8&bpctr=1414926074]
While I have to admit that the make-up, the effects, the movie set and the backgrounds are rather OK for a low-budget film, I have to complain about the unrealistic and unaesthetic Nazi utensils and the great lack of stagecraft. When even a Dyanne Thorne isn’t capable to imitate a German accent and fails more than once in pronouncing “Reich” correctly, I seriously wonder what the hell they were thinking. I also thought, quite a few times, that the actors rather tried doing a Russian accent than a German one.

If you are an (Nazi) exploitation fan or interested in underground movie genres. If you are not afraid of bad acting and the atmosphere of a trashy B-Movie. If you understand the intension of a low-budget movie. If you like tits, women in uniforms, blood and torture, Ilsa, She Wolf of the SS is the perfect movie!