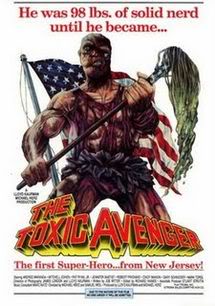 People probably ask why there is going to be another review of this movie. The answer is quite simple: Because it deserves it!

First The Toxic Avenger is a low-budget trash comedy horror movie released by Troma Entertainment in 1985. Over the past years the film has become one of the most important campy B-Movies of the 80ies.

The story basically is about a boy called Melvin Junko, who is the biggest loser in town. He works as a cleaner in Tromaville’s fitness club and gets constantly mobbed by other teenagers. One day Melvin has to don a pink ballet tutu and gets chased through the whole fitness club. As a last resort he jumps out of the window and lands into a barrel full of toxic waste.

Melvin doesn’t die but changes into the first superhero born out of nuclear waste. From now on he is going to fight for justice and fairness in his hometown Tromaville.
[youtube https://www.youtube.com/watch?v=27E4Qfj7iEY]
The Toxic Avenger is, in the first view, a cult classic trash movie but a deeper meaning and interpretation can also be recognized. The film can be described as an ironic mirror of the exaggerated cult of the body, cult of physical health and beauty societies. Furthermore, Melvin not only fights against crimes and the bad guys, he also attacks the corrupted local power structures. With this ideas, Lloyd Kaufman and Michael Herz call the viewer’s attention to important social problems (which today seem more relevant than ever) and want to support people´s social criticism. I think it is absolutely genius to “caricaturize” the brutal, dull, superficial and egoistic modern, mainly western societies with the help of an exaggerated B-Movie.

The last intention of reviewing a Troma Entertainment movie is to show my personal support and to promote the greatest independent film production and distribution company on earth. I highly respect Lloyd Kaufman for his devotion to independent movies, his supportive attitude towards movie-lovers and for campaining for Net Neutrality.