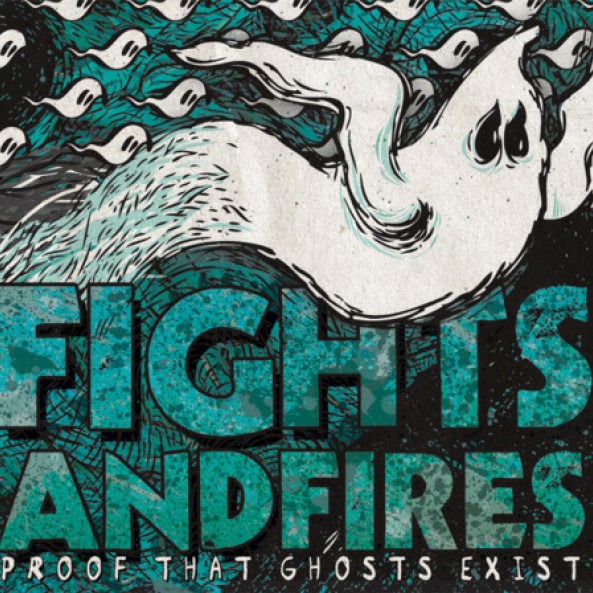 The Proof That Ghosts Exist (or how I would say: “the proof that totally unknown bands selling totally cheap CDs can actually be pretty catchy!”) is the 2011 release by the 4 young Englishsmen Fights and Fires.

“Fights and who..?” you might ask now. Well, the boys have started to build up some reputation in the UK for sure, their excessive touring over the last months actually also brought them to Luxembourg’s Food For Your Senses 2012 festival for example, where I had the chance to enjoy their show (check here).

I must say the opener of their album caught the whole heaviness and rudeness that filled the tent stage back then. 59 seconds of pure force followed by My Rusty, a mix of hardcore, postcore, punk and pop punk elements. “Are you kidding me?” No they apparently aren’t. My astonishment quickly changed into excitement, because this mix actually gives them a very catchy mark, very enjoyable if you like popish postcore elements these day (or back in the At The Drive-In times).

Shake It again sums up the whole Fights And Fires sound and even lets your hips move with its danceable refrain. Don’t worry; they never miss the right moment to smash your face with post and hardcore outbursts. In case this all sounds like a Sum 41 release to you – it is not the case. As already said, the odd thing about all this is the fact that they actually seem to be way more brutal during their live performances, which doesn’t mean that the album loses its energy. I would never have expected to encounter such a situation with a 5 € CD, coincidentally bought on a small festival. You just got to love such discoveries.

A head banging and hip moving experience, mixing punk refrains with “bear-ish” outbursts (that front man actually looks like a bear, cheers mate!). Drums, bass and guitar also perfectly switch from metal to disco (damn they gonna kill me if they read this). Although slightly flattening towards the end, this release is a very welcome guest in one’s CD player during a half an hour car trip.

Recommendations: Tracks 1 to 4 in a row!