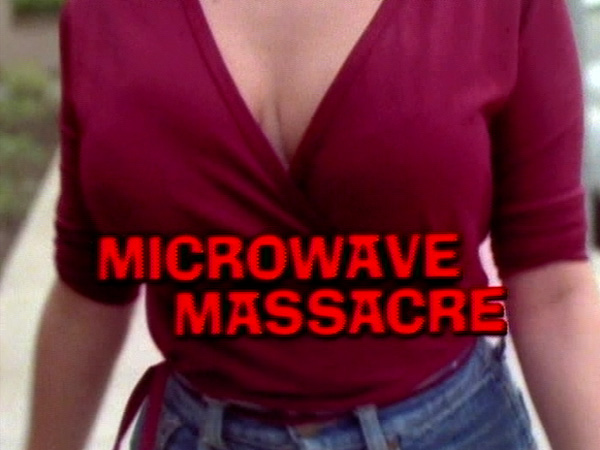 In the whole trash horror movie scene it was at one point very popular to label the movies with quotes like: the worst movie ever done, so bad that it is good , the worst horror movie you have ever seen and stuff like that in order to hope that the flick gets a cult following (c.f. Troll 2, Troma stuff). It is the same as nowadays people lable their movies with Tarantino’s favourite movie, Tarantino farted during the intro or Tarantino ate a burrito with his best friend when this movie premiered 1000 miles away. The Tarantino just as the „worst movie“ slogans have something in common, they are simply meaningless and often a lie.

Microwave Massacre (1983) is one of those movies where marketing people try or tried to merchandise and promote it with a worst horror movie of all time slogan. In this case it is inappropriate because most of the time the movie is simply not “that” bad that it is really good or funny again, except for the really genius beginning. The writers tried hard, especially with the dialogues but in the end, I think this is the problem, they tried too hard. Even for 1983 most of the dialogues are simply bromidic and often consist of pseudo trashy one-liners (some of them can be read here)  (I still have to admit that I smirked 2 or 3 times but this is simply not enough). Microwave Massacre is again one of the movies where you simply expect a little more just because of the title.

What else can you expect from the movie? Well, the actors are as talented as a paraplegic doing ballet, there are a lot of hookers and logically nudity and even more fake, plastic body parts accompanied with an incredible cheesy synth soundtrack and really awful props, loosely based on the formula of one wise man: “In order to sell your B-Movie, you have to include blood, boobs and a beast”. In the end, just imagine a bad cannibal B-Movie that lives up to nearly every single superficial cliché you know and concentrates on a man killing/eating his wife, then switches over to hookers and prepares the meat in his microwave.

To conclude, let’s say that Microwave Massacre isn’t a must see but rather an amusing can-be seen which, I personally think, you should watch with a few male (!) firends, lots of beer and pizza. Finally, as so often, do not forget to put your brain on standby and the flick may work. If you are a fan of trash give it a try.