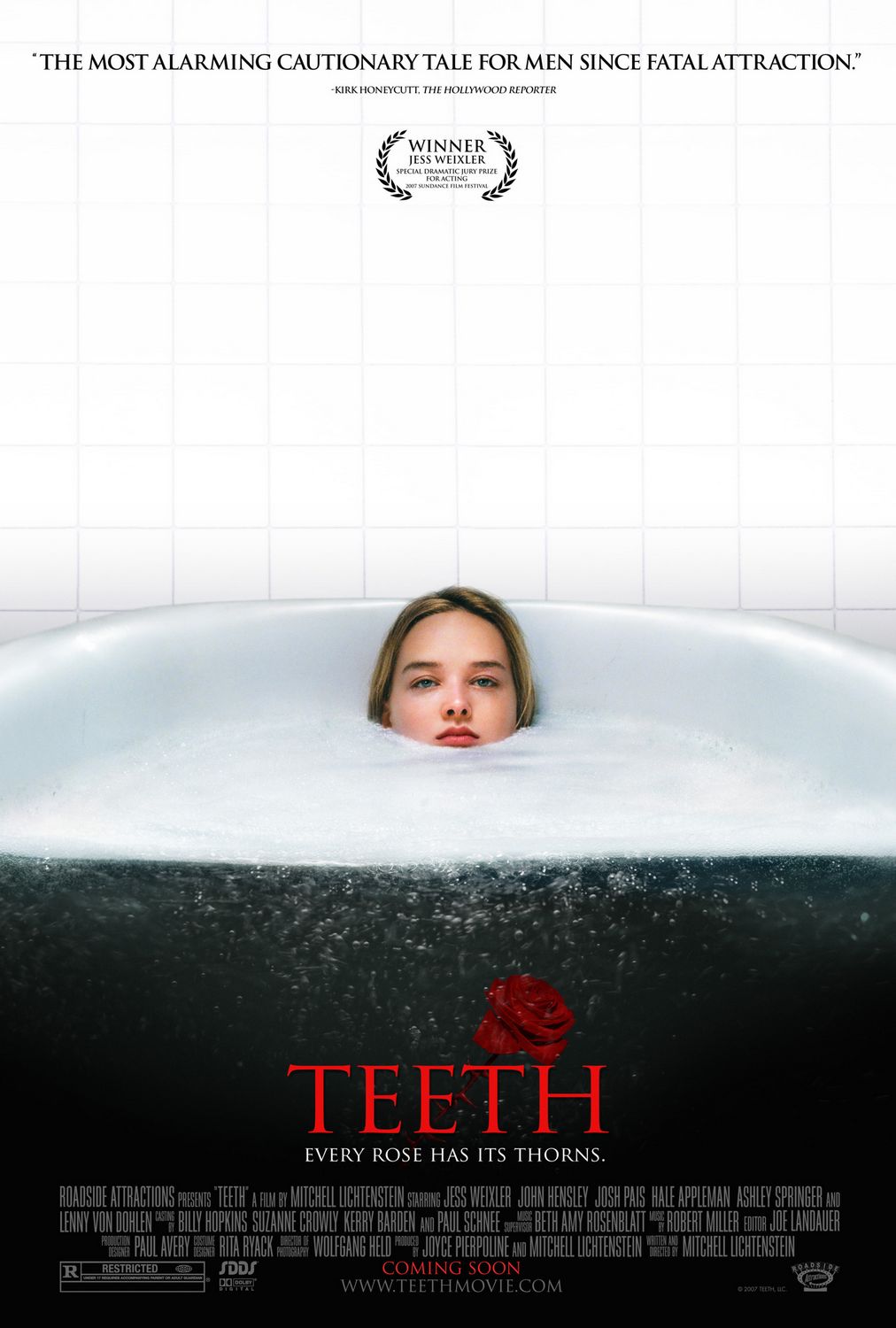 We’ve decided to do something fun for the whole family: a quadruple movie review. Therefor we chose a movie that none of us really knew but which seemed interesting enough to get a reaction out of everyone.

Teeth (2007) is a horror film which was written and directed by Mitchell Lichtenstein. It premiered at Sundance in 2007 where it was claimed to be one of the most talked-about films. To sum up, Teeth is about Dawn, a high school student, who suffers from a primary sexual characteristics abnormality, which she learns to use as an advantage when she becomes the victim of sexual assault.

Furthermore, I have no idea what Lichtenstein wants to tell me. Teeth has absolutely no clear vision. There are simply too many different topics/genre elements in the movie which, to top it all, don’t work. The subject of feminism, which is the most obvious one, can be taken as serious as the subject of sexism in slasher/horror movies. The boys/men are portrayed as primitive sex demoniacs and act completely unnatural.

Furthermore I am pretty certain that the director was unsure about how to explain the vagina dentata phenomenon. On the one hand he throws in a few mythical elements (and I even was expecting some Sigmund Freud too), on the other hand we see this nuclear power plant all the time (nuclear mutation of the vagina?) The ending is representative for the whole flick. Lichtenstein tries to build up a twist ending (which you recognize pretty early), rethinks his decision and follows the path of a rape and revenge movie. Teeth bases on a great idea, wants too much and results in a mess.

When we first talked about which movie to pick I was intrigued by this one, because quite frankly: the plot outline had a lot of potential. A young girl has teeth in her vagina and becomes a man-eater… literally. Man, was I wrong! I don’t watch a lot of films of this genre, so I had no idea how bad a movie can be. All I know is that at times I wish I was the one who was subjected to penectomy, because that would probably have been less painful to endure than these ninety minutes of garbage.

The acting was pretty terrible from start to finish, the cut-off penises looked as credible as a pink elephant’s trunk and the music left my ears with a bad case of aural diarrhea. My personal “highlight” was Dawn‘s incestuous brother who was supposed to be the tough metalhead with terribly-done make-up tattoos and a Rottweiler as his best friend. The one thing that this movie has taught me is that people who don’t masturbate on a regular basis will go completely bat-shit-crazy at some point. So in order to keep mentally healthy, choke that chicken (or rub that duck) as often you possibly can.

A good lesson this movie taught me: any movie with a laurel shrub on the poster is no guarantor for a masterpiece. As Teeth tries to caricature America’s prude position on sexuality, with organisations like The Ring Thing, Teeth is nothing but a disappointing attempt to mimic this oddball attitude of (mostly) young Christians. What is really frustrating is the fact that Teeth is too good to be called trashy and too bad to be considered a serious flick. It’s neither dick nor beaver, hence the intimidating teeth. The plot twist, if you can call it so, is as predictable as North Korea’s annual declarations of war and the step-brother’s tattoos are as true as Christian black metal.

I am not a nucular expert, but only because the family lives next to a nuclear plant does not mean that you turn into some kind of penis-eating gargoyle; unless I’m missing out the latest news of Fukushima.

Two things are for sure though: some roles will stick to the actor for a whole lifetime and in this case, Jess Weixler will forever be known as the girl with the toothed gash. And last but not least; I will never ever say “I’ll chop my fingers off for that girl” again.

I went into the film with an open mind because it has undeniable potential. I recognise that it tries to tackle important social issues — most notably, it criticises the puritanical (and, it must be said, characteristically American) attitudes kids are taught in sex ed that end up causing more harm than good. Dawn‘s biology textbook depicts the anatomy of the penis, but the schematic illustration of the vagina is covered up by a large sticker because “girls have a natural modesty”, and so Dawn walks about the earth not really knowing what the female sex organ typically looks like and how it works. Both Dawn and her crush at the beginning of the film have made a sacred vow of abstinence because of their Christian indoctrination. The guy ends up attempting and semi-succeeding at raping Dawn because he is a violently horny bundle of sexual repression after, and this is a direct quote, not having jerked off since Easter.

Those are fair criticisms, but unfortunately, the execution leaves a lot to be desired. The acting is cheesy and the storyline erratic. In combination with technical slip-ups like overstated sound effects, it gives the movie a cheap, silly vibe. Furthermore, as Luc said, I’m not sure what the aim of this movie is. Is it trying to make a point about sexual violence, sexual repression, the sexual behaviour of teenagers, incest or female empowerment? Probably all of these, but it doesn’t work. I couldn’t detect the comedy in it, either. And so it ends up being just another vacuous, ill-executed pseudo-thriller with a few gore shots thrown in on the side in an attempt to make it marketable to the horror crowd.

To be honest with you, at first we didn’t think we’d all be agreeing but Teeth, despite its great potential, sucks dick (pun intended). Don’t waste your time and forget this movie…