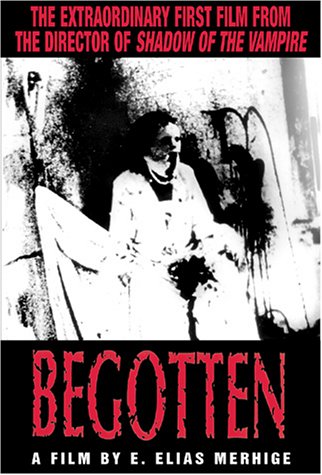 There is a lot of disturbing stuff out in the cinematic world and even though I have seen a lot, there are always films which literally fuck my mind. When I ask people about the most disturbing movie they have ever seen most of the answers are related to either the New French Extremism with Martyrs and À l’intérieur, the Italian cannibal films with Cannibal Ferox/Holocaust or the Asian splatter and gore genre with the Guinea Pig series and Ichi The Killer. I partly agree with the people and claim that most of those films are disgusting, brutal and controversial but in the end they are not really disturbing. This probably is a question of definition but personally, I think a disturbing film should have more to offer than simple shock value and that’s when experimental cinema comes into the limelight.

Begotten‘s premise is not easy to follow and there are a lot of different interpretations throughout the internet. I won’t concentrate on those but the movie contains all kind of religious references. I highly recommend watching the film without doing any research but to look some stuff up on the internet afterwards. The plot alone is probably one of the weirdest things I have ever read.

After director Elias Merhige, the script is inspired by Antonin Artaud’s Le Théâtre et son Double, Nietzsche‘s ideas on aesthetics, and a near-death experience Merhige had when he was 19 years old. To sum up, Begotten is an intense and dazing avant-garde horror experience, a cinematic wreckage and if this wasn’t enough, the film was shot on black and white reversal 16mm film and the director rephotographed, filtered and manipulated every single frame in order to intensify his surreal visions and artistic violence. Together with the unconventional decision to abstain from dialogues and traditional storyline the cinematographic brilliancy attains to perfection.

I am still enraptured by the grotesque and radical atmosphere, by the pulsing images and the raw violence. Begotten is a movie which you will never forget! And last but not least here is an interesting article I came across a few days ago: Begotten Antichrist: Did Marilyn Manson synchronize Antichrist Superstar to the movie Begotten?