The movie title stands on its own and if you are into fun splatter flicks, you can easily skip the review and just buy the dvd for 4-5 euros HERE.

If you are not familiar with the Portuguese independent film crew The Clones (even though this is our third review after Papa Wrestling and BLARGHAAARHGARG!!), I am going to drop a few lines. Banana Motherfucker is commonly described as “(…) the harrowing tale of a group of filmmakers who unleash a new form of evil – Bananas! What starts off as a small scale attack becomes a total world-wide domination by this delicious fruit, resulting in about 80 deaths jam packed in 15 minutes.” (twitchfilm.com). Still not convinced? Well, I think you simply won’t like the movie then.

Banana Motherfucker (2011) again is a low-budget comedy splatter with a lot of do-it-yourself special effects/props and this time the clowns ehrm…Clones threw some really nice classic horror movie homages in. I won’t spoiler too much but every horror fan will recognize some Nightmare On Elm Street, Terminator and Jaws here, some King Kong and Cannibal Holocaust there but in the end Attack of the Killer Tomatoes probably is the most obvious one. Even zombie movies are attacked with the black guy, who dies in every zombie flick, randomly and completely out of context appearing just to die! 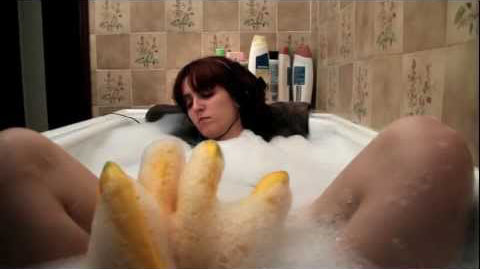 It is the whole concept of Banana Motherfucker which makes this 15 minute short flick that attractive. The mentioned above homages, the over-dramatized and hilarious bad acting accompanied by typical ’80s horror music. The Portuguese language with every second word being caralho (dick) and a nice filho da puta (son of a bitch) from time to time. But what I really like about the Clones and their movies is the love for detail when it comes to the death scenes. Although they are all DIY, they look amazing. There are decapitations, seperated extremities, impaled heads, eyes, guts and blood, in short everything a fun splatter needs. And the most important thing: you always have a huge smile on your face and this throughout the whole movie.

P.s. If you are afraid of ever getting attacked by fresh fruit and especially bananas you should join the Monty Python self-defense course.